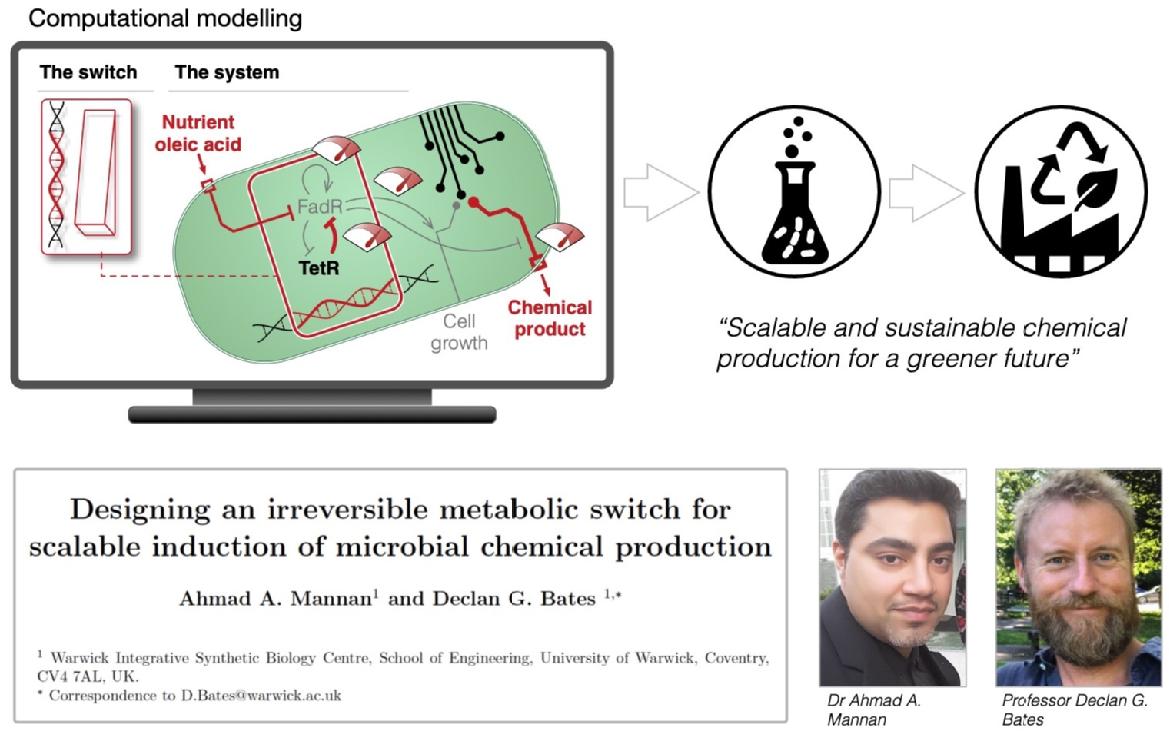 – Most high-value chemicals are currently produced using fossil fuels – industrial chemistry’s use of petroleum accounts for 14% of all greenhouse gas emissions.

– An exciting alternative is to engineer bacteria as “cell-factories” with a genetic switch that reroutes their chemistry to produce high-value chemicals, such as biofuels, polymers and pharmaceuticals.

– The use of expensive chemicals to switch them on severely limits their commercial potential, researchers have used mathematical models to develop a new genetic switch that can use a cheap natural nutrient to switch on production permanently – drastically reducing that cost.

– This brings closer the realization of sustainable and economically viable industrial-scale production of high-value chemicals from cheap feedstocks, for a greener, cleaner future.

High-value chemicals used in biofuels and pharmaceuticals can be made from bacteria by switching their chemistry to produce novel products. Researchers from the University of Warwick have found a way to drastically cut the cost of turning on these switches.

We use chemicals for almost everything, from food preservatives to pharmaceuticals and cosmetics, and even biofuel. Many of these are petrochemical derivatives, and so their synthesis is not sustainable. It is therefore essential to seek alternative ways to manufacture chemicals, on an industrial-scale, sustainably and cheaply – paving the way to a greener cleaner future.

Bacteria can be seen as nature’s micro-chemical factories, and many researchers are trying to understand how their complex network of chemical reactions can be re-wired to convert cheap feedstock like glucose into useful chemical products for our use. Using genetic switches to redirect the bacteria’s chemistry is an exciting development in the field of Synthetic Biology.

Typically, genetic switches are turned on by adding a chemical called an inducer. However, inducers are expensive, and often need to be constantly added to prevent switching back off, analogous to a “light switch with a spring in it” that turns back off when you let go. This makes this switching approach expensive and so scaling up to industrial production economically infeasible.

In the paper, ‘Designing an irreversible metabolic switch for scalable induction of microbial chemical production’, published in the journal Nature Communications, researchers from the School of Engineering at the University of Warwick have found a cheap way to switch bacteria into chemical production mode.

Led by Dr Ahmad A. Mannan and Professor Declan G. Bates from Warwick’s Integrative Synthetic Biology Centre at the School of Engineering, new theoretical research investigated how biosensors from E. coli that respond to cheap natural nutrients like oleic acid can be harnessed to create switches. Using mathematical models and the engineering principles of feedback control loops, commonly used in flight control systems, they discovered how to design a genetic switch in bacteria that removes the reverting “spring”, so that adding only a pulse of a cheap natural nutrient can switch the cell to chemical production mode permanently – drastically cutting costs.

“The ability to switch on bacteria into chemical production mode permanently is a massive step forward to realising economically viable scale up of chemical production from microbes. The switch should be widely applicable to many industrially relevant microbes and for the synthesis of almost any chemical – a versatile component in the Synthetic Biology toolbox. The next steps of our research would be to uncover the principles to understand where in the chemical roadmap to apply this “traffic light” and perhaps look to collaborating with industry where it could be readily incorporated into existing fermentation processes.”

“Using cutting-edge synthetic biology techniques our work has laid out the framework for constructing the proposed irreversible switch in the lab. Not only could our work change the way chemical industries make high-value chemicals, it also contributes to the larger vision for how humans can move away from reliance on non-renewable resources, to enabling sustainable synthesis of biochemicals, for a greener, cleaner future.”