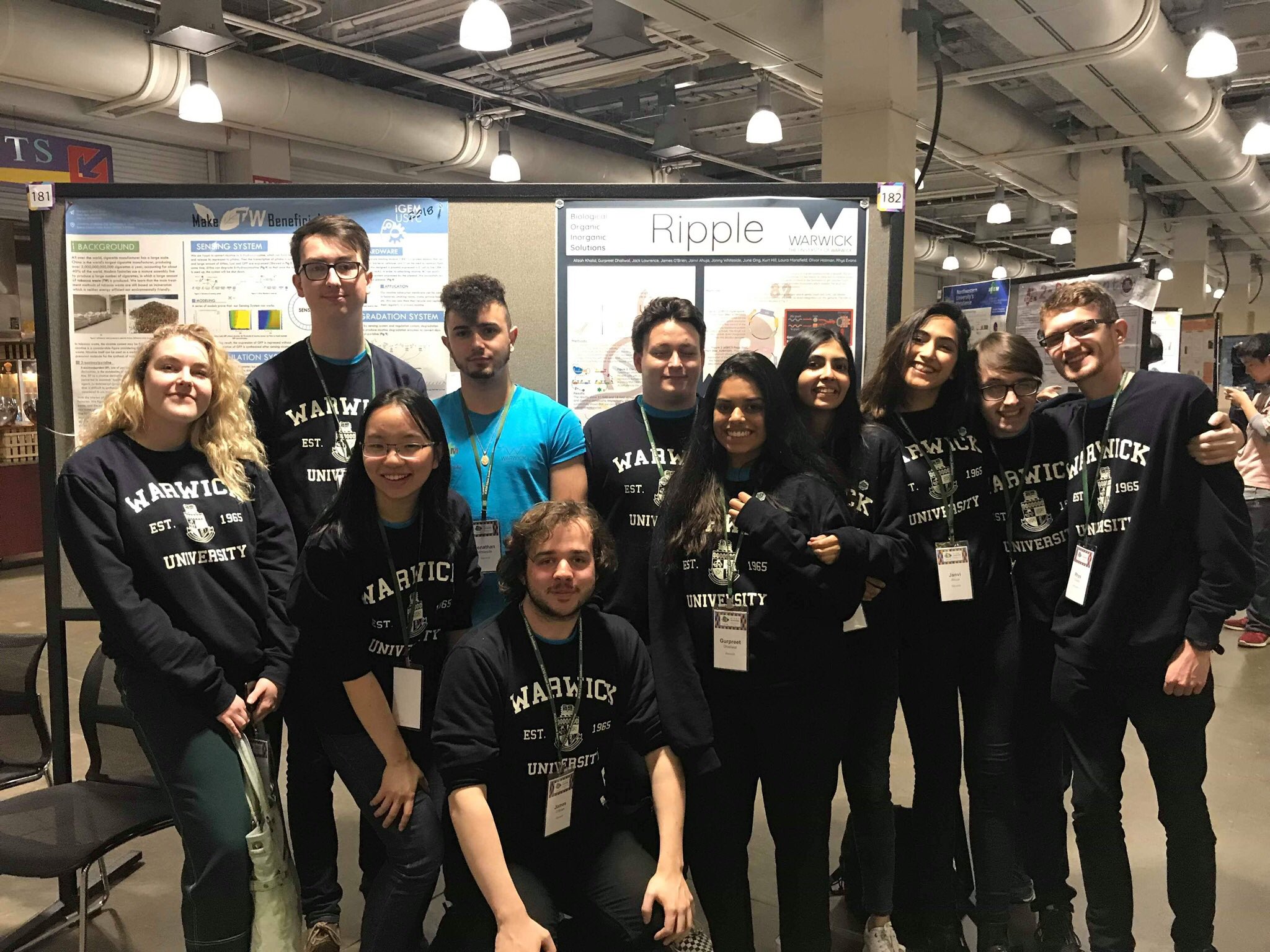 We are very proud of our 2018 iGEM team and all of the hard work they put in over the summer. They were rewarded with a gold! Congratulations! Read about their experience below and apply for next year’s team here www.warwick.ac.uk/igem.

Our iGEM journey was an emotional and tumultuous one. After a couple months of brainstorming ideas, we began our work in July, tackling water pollutants from three classes: biological, organic and inorganic contaminants of water. We identified a key issue in each class of contaminants and formed dedicated sub-teams which worked between the projects over the summer. The biological arm of our project focused on a novel approach to detection of Legionella pneumophila, a harmful pathogenic bacterium found in systems containing water mist (such as hot tubs and air conditioning units), using a highly specific riboregulated dCas9 circuit. The organic aspect of our project centred on detoxifying oestrogen, a hormone found to be contaminating water in both its natural and synthetic forms, which has been found to cause sex reversal in fish as well as carcinogenic characteristics. To tackle inorganic pollutants of water, we also worked on engineering ‘floating bioremediating bacteria’ to more easily remove heavy metals, such as lead from water. Using the naturally lead-absorbing Bacillus subtilis as a model organism, we induced expression of gas vesicles, originally from cyanobacteria, to cause cell flotation upon uptake of lead in the B.subtilis outer membrane.

During the summer we examined the impact of our work on society and current institutions by contacting the EU’s Commissioner for Environment and speaking to officials from water authorities around the world. As well as this, we aimed to increase public knowledge of the field of synthetic biology through studies on participation, creating a synthetic-biology themed children’s video game and attending national events such as New Scientist Live to speak to the public. One of the most poignant comments we received was from a member of the public at New Scientist Live who brought her two young daughters to the exhibition; after speaking to us about genetically modified organisms and the ethics of genetic engineering, she mentioned how even our short discussion had changed her perception of what scientists look like and she hoped that seeing women in the field would also encourage her daughters to pursue careers in STEM.

Our team was comprised of 11 Warwick undergraduate students from different academic backgrounds:

Anyone who has participated in iGEM would probably agree with the huge impact it has on the perspectives of its participants. From knowing very little about synthetic biology back in July to presenting our work on stage at the Hynes Convention Center in Boston in October, we came a long way over the summer. And this is largely due to the fantastic support we were given during our four-month project from our PIs, supervisors, Professors and the PhD students who gave up their time to train us in the basic concepts and techniques used in synthetic biology as well as being there to help and console us when we were miserable after an eighth failed PCR reaction just days before the deadlines.

Despite the fact that our iGEM experience was an incredible one, it was also a short one. If we had only had more time to we could have attempted to take our projects to completion and perhaps implementation or even perhaps could have started our lab work earlier and familiarising ourselves with the field a bit earlier. Nevertheless, it truly was an immersive experience and for many of us, one that we will remember as a highlight of our university experience.

All in all, despite the late night labs, tears and stress iGEM caused us – the experience enabled us all to grow as scientists, communicators and, above all, as learners.